The 2017 Macro Group Jon Weaver PhD Prize has been awarded to Dr Charlotte J. Mable at the University of Sheffield for her PhD thesis “Block Copolymer Nanoparticles Prepared by RAFT Aqueous Polymerisation”. 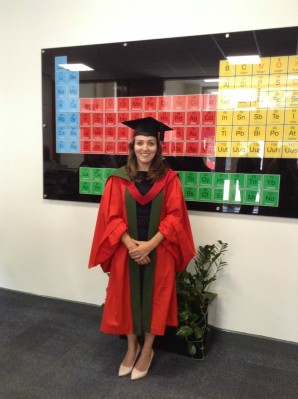 Charlotte’s research has yielded six primary publications in the Journal of the American Chemical Society (1), Chemical Science (2), Macromolecules (2) and Macromolecular Rapid Communications (1), with a seventh manuscript in preparation. Her latest publication was selected for the back cover artwork for the February 2018 issue of Chemical Science. During her PhD, Charlotte also worked with research groups at the Universities of Edinburgh and Hull as well as teams based in Germany, Australia and Switzerland. These collaborations have yielded eight additional joint publications, with further manuscripts in preparation. Charlotte presented her PhD results at several national and international conferences, including the 2014 ACS National Meeting held in San Francisco where she was awarded a poster prize.

Aside from her scientific achievements, Charlotte managed to get married, renovate two houses and have a baby during her four-year PhD degree. After taking maternity leave, Charlotte has returned to the University of Sheffield as a part-time postdoctoral research associate under the supervision of Prof. Steve Armes. She is currently extending her PhD studies to design synthetic mimics of the Dengue fever virus for anti-cancer therapies.

The Macro Group UK Young Researchers Medal is awarded annually to a UK based scientist with up to 12 years of experience since completion of PhD on December 31st of the preceding year (exclusive of career breaks) and whose contributions to polymer science show out-standing promise for the future.

Dr Rachel Evans obtained her PhD in Physical Chemistry in 2007 from Swansea University. She was a Marie Curie Postdoctoral Fellow at the Université Paris-Sud, France and subsequently held an FCT research fellowship between the University of Coimbra and the University of Aveiro, Portugal. In 2009, she was appointed as a Contract Lecturer in Physical Chemistry at Trinity College Dublin (TCD), and in 2011 became the Ussher Assistant Professor in Device Fabrication. She was subsequently made a Fellow of TCD and promoted to Associate Professor. In 2017, Rachel moved back to the UK to take up a University Lectureship at University of Cambridge in the Department of Materials Science and Metallurgy. Rachel’s research is multidisciplinary and involves polymer, colloid and photophysical chemistry. Her current work is focused on the development of photoactive polymer-hybrid materials for luminescent solar devices, organic photovoltaics and stimuli-responsive membranes. Rachel has numerous national and international collaborations and is a member of the Editorial Board for Materials Chemistry Today. Previous awards for her research include the RSC Ronald Belcher Memorial Lectureship and the Dillwyn Medal from the Learned Society of Wales.

The Macro Group UK Medal is awarded annually to a UK based scientist who has made a significant and substantial contribution to the development of polymer science through his/her scientific achievements and/or services to the UK polymer science community. 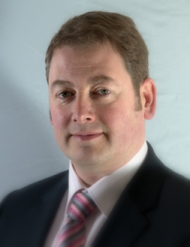 This year the award has been made to Professor Andrew Lewis, Director of Research & Development, Innovation, Biocompatibles UK Ltd, a BTG International group company, Professor of Biomaterials & Drug Delivery. Professor Lewis has experience of developing products within small, medium and large companies, having spent his early career with ICI working in the area of advanced polymer membranes and subsequently with Johnson & Johnson leading projects in absorbent technologies.  Andy joined Biocompatibles in 1996 and is Director of R&D in Innovation (now part of BTG).

He specialises in the development of advanced biomedical polymer systems, for instance, to enhance the biocompatibility of implants or to modulate delivery of active agents in the body. These technologies have been applied to novel drug-device combination products for use in interventional therapies in the treatment of cardiovascular disease and cancer and have resulted in around a dozen products reaching commercialisation.

Andy has generated around 230 scientific peer-reviewed publications and articles (H-index 52), 11 book chapters and 50 patent families/applications in the fields of polymers, biomaterials and drug delivery. He is Professor of Biomaterials & Drug Delivery at the University of Brighton where he lectures on Drug-Device Combination Products and in 2015 was recognised by the scientific community with the award of the Chapman Medal for distinguished research in the field of biomedical materials, particularly with respect to biomaterials innovation, which has produced benefits for patients and/or contributed to associated opportunities for industry. In 2017 he was presented with the Royal Pharmaceutical Society Award for Excellence in Pharmaceutical Science for his contribution to the development of a Novel Drug-eluting Bead concept that had just entered clinical evaluation.

The Macro Group UK Medal for Outstanding Achievement is awarded to a scientist based anywhere in the world that has made outstanding contributions to the field of polymer science. This year award has been made to Professor Steve Armes (Director of the Sheffield Polymer Centre, University of Sheffield, UK).

Professor Steve Armes graduated from the University of Bristol (BSc 1983 and PhD 1987). He took up a two-year post-doctoral fellowship at Los Alamos National Laboratory (1987-1989) and then accepted a lectureship at the University of Sussex. He was promoted to Professor in 2000 and moved to the University of Sheffield in 2004. He has published more than 580 papers (H index = 103) and his current research interests include the following topics: polymerisation-induced self-assembly, water-soluble polymers, biocompatible polymers, stimulus-responsive polymers, block copolymer self-assembly, branched copolymers, polymer brushes, living radical polymerisation, pH-responsive microgels, colloidal nanocomposite particles and conducting polymer particles. His research has inspired the development of three commercially successful products by BASF, DSM and Cabot.

He was awarded the 2006 RSC Macro Group medal, the 2010 RSC Peter Day award for soft matter research, the 2013 RSC Tilden medal, the 2014 RSC Interdisciplinary Prize, the 2014 Thomas Graham lectureship, the 2015 Colloid and Polymer Science lectureship from the German Colloid Society, the 2016 DSM Materials Science award and the 2017 ECIS-Solvay Prize. He was elected as a Fellow of the Royal Society in 2014. He is the Director of the Sheffield Polymer Centre and also leads the only CDT in Polymers, Soft Matter and Colloids in the UK.

The Macro Group UK Young Researchers Medal is awarded annually to a UK based scientist with up to 12 years of experience since completion of PhD on December 31st of the preceding year (exclusive of career breaks) and whose contributions to polymer science show out-standing promise for the future.

Dr. Georgiou obtained her PhD in polymer chemistry in 2006 from the University of Cyprus. She then moved to the USA and worked as a Postdoctoral Fellow at Rice University. In 2007, Theoni was awarded an RCUK Academic Fellowship and moved to the UK to join the Department of Chemistry at the University of Hull. In 2014, she was appointed as a Lecturer at Imperial College, in the Department of Materials. She has been recently promoted to a Senior Lecturer position in the same department. Her research focuses on the synthesis of well-defined polymers using living and controlled polymerisation. Her interest is to develop polymers with potential biomedical applications, including drug delivery, gene delivery and photo thermal therapy. Theoni’s work has led to numerous publications and she has recently become an associate editor of the RSC Advances journal

The Macro Group UK Medal is awarded annually to a UK based scientist who has made a significant and substantial contribution to the development of polymer science through his/her scientific achievements and/or services to the UK polymer science community.

This year the award has been made to Professor Ian Hamley (University of Reading).

Professor Hamley received his PhD in chemistry from the University of Southampton in 1991. After postdocs in Amsterdam and Minnesota, he returned to a lectureship at Durham University, moving to the University of Leeds where he worked for a decade before taking a joint professorship with Diamond Light Source at the University of Reading in 2005.

His work is multidisciplinary and involves polymer, colloid and biophysical chemistry and a key theme is understanding molecular self-assembly in soft matter. Using x-ray scattering, Ian established the nanostructures of block copolymers in the melt, which led to a detailed understanding of their nanostructures. His current work focuses on the development of peptides, and polymer-peptide and other peptide-based conjugates with potential healthcare applications including the treatment of amyloid diseases and the development of immune therapies. This work has been supported by EPSRC and BBSRC grants, including a recent EPSRC Platform Grant, as well as industry. Over the years, he has developed numerous collaborations both nationally and internationally and he has numerous high impact publications (with more than 13,000 citations) and has authored three books. Recent awards for his research include the Royal Society Wolfson Research Merit Award (2011) and the RSC Peter Day Award for Materials Chemistry (2015).

We are pleased to announce that the first award of the Ottewill International Travel Scholarship has been made to Qian Sun from Cambridge University.  The award was established using residual funds from closure of the UK Polymer Colloids Forum (UKPCF), as announced in the June 2016 issue of the Bulletin, and is designed to assist, each year, one outstanding UK-based graduate polymer colloids researcher in presenting their work at an international conference outside the UK.

Qian is carrying out PhD research into aqueous core, metal-coated colloidosomes under the supervision of Dr. Alex Routh at Cambridge and will use the award to attend and present at the 91st ACS Colloid & Surface Science Symposium in New York in July.

on behalf of the Ottewill International Travel Scholarship Award Committee